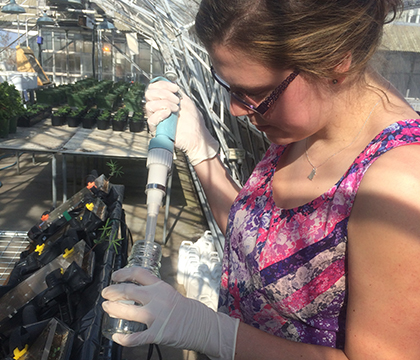 Thanks to Lincoln University and Ballance Agri-Nutrients, Amy is taking full advantage of an opportunity to pursue a doctoral study in soil science, a field she is passionate about and believes holds vital importance to both the local and global economies.

“Soils acidify over time, through natural weathering and land use,” explains Amy. “This affects their utility for agriculture and reduces overall productivity – essentially reducing the amount of food we can grow and produce.

“This is not just a New Zealand problem but also a global one too and it isn’t going away by itself, so we need to research the issue and find ways to address it.”

Her research is part of a body of study that looks into the known association between acidic soils and aluminium toxicity, which affects the growth of plant species and in particular legumes such as clover and lucerne. Legumes are critical to the economic viability of New Zealand sheep and beef production.

“This research will help to inform better land use decisions – such as where best to apply fertiliser and lime to get optimal soil productivity and also which mitigation strategies will be most effective.”

Despite growing up in urban environment Amy enjoys going out onto farms and says some of the best parts of her research involve getting out into the field and meeting the farmers her research will help most.

“It’s hard to complain when the field sampling requires me to travel to some of the most beautiful parts of New Zealand,” says Amy. “The farmers we talk to are generally very well informed and know what we’re trying to achieve; it’s great to know they are interested and supportive of our work.”

“The cutting edge research being carried out by Amy and her colleagues should deliver key insights on how best to prioritise fertiliser and lime inputs to areas of low fertility that are most prevalent in hill and high country regions. The economic and productivity impact will be huge from prioritising the right lime and fertiliser spend to the right soils and landscapes,” says Warwick.

“We’re excited to support doctoral research at Lincoln University as part of our wider research and development programme, and are encouraged that bright minds like Amy are passionate about advancing soil research in ways that will generate tangible improvements for both our farmers and primary industries as a whole.”