From fert to food and back again 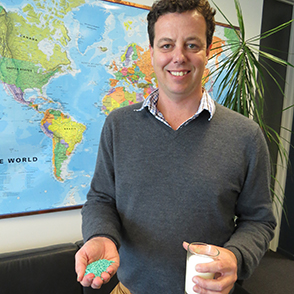 It’s six years since soil scientist Jamie Blennerhassett left his day job to set up an ambitious gourmet food market in Mount Maunganui. Now he’s returned to his scientific roots, bringing with him commercial acumen honed at the helm of Nosh, to lead our innovation team at Ballance Agri-Nutrients.

When Dr Jamie Blennerhassett left his career as a soil scientist to set up Mount Maunganui’s first gourmet food market, he pictured the start-up adventure through a well-worn pair of rose-tinted glasses.

The relentless optimist and his wife Jo, a trained nurse, were excited to be launching The Good Food Trading Company; an endeavour which would challenge the norm in a food scene dominated by bulging supermarket chains.

“It soon became terrifying,” Blennerhassett recalls now. “Like all good entrepreneurs, you think you understand how hard it will be but you don’t know what you don’t know. We had no retail experience, we had no food experience except that we were good shoppers, and good eaters. The deli concept was Jo’s long-held passion and I brought commercial experience. But all of my marketing knowledge from the fertiliser industry just wasn’t applicable beyond some very big-picture concepts. We were so, so green.”

Along the way, Good Food became Nosh Mt Maunganui. The business is now six years old and Jo has it running like clockwork, so Blennerhassett is now free to return to soil science at Ballance.

Blennerhassett has been appointed our newly-created innovation leader role. He leads a team of five scientists, and is charged with shaping the business’ innovation culture and launching world-leading products.

He says the link between fertiliser and food is obvious: “Good food is only made possible by great soil. I always knew that, but now I have an even better appreciation of the selling power of an international-standard food product, and I know that level of quality is only achievable when producers start with good soil”.

Ballance chief executive Mark Wynne says Blennerhassett offers the company a great combination of robust start-up experience, commercial instinct and the kind of scientific rigour required to publish a thesis on the opportunities for nitrogen fertiliser use on dry hill country.

“The innovation leader is a role for a courageous and ambitious leader with a drive for results. We absolutely have this in Jamie.”

Blennerhassett grew up on a crop and livestock farm east of Te Puke. After university, he began his scientific career with Summit Quinphos (which later merged with Ballance), under the mentorship of industry pioneer Bert Quin. Through Quin, Blennerhassett developed a mindset of challenging the norm.

“Under his leadership, I formed a view that we could only survive if we could be smarter and more nimble. Out of that was born a view that there must always be a better way.”

It’s this mindset that drove the Blennerhassetts to shake up the Bay of Plenty food scene and it’s this mantra which will drive the innovation team at Ballance under Blennerhassett’s leadership.

“What I bring is the constant focus on finding practical applications for scientific discoveries,” he says. “Our team considers every innovation through the eyes of the customer. What would this mean to a farmer?”

Wynne says that as is the focus throughout the business, innovation at Ballance places farmers and farming systems at the heart of decision making, with the goal of keeping New Zealand farmers at the forefront of nutrient innovation.

“Along with running our research and development programme, our innovation team shops the globe for inspiration, with a view to applying any discoveries to New Zealand’s soil and farming needs. Once we introduce a new product or service, equally as important is the advice we provide farmers on how to use the innovation within their individual farm system to achieve the best results.”

Blennerhassett says the optimism with which he pursued his retailing dream also convinced him he could always find invigorating career opportunities in the Bay of Plenty. He never considered he’d have to live in Auckland or offshore to build a career as an innovator.

“I don’t know if I was naïve or not but I always thought the Bay of Plenty was the centre of the universe.

“With a bit more experience, and hindsight, I now realise I’ve been incredibly lucky to have such fulfilling career opportunities in the Bay. Jo and I get to raise our family in this environment, with this lifestyle. She’s running the show at Nosh, and that business had been her dream for so long, and I have this great job blending a unique blend of skills and experience. We are very fortunate.”