Results at a glance

New Zealand’s leading farm nutrient supplier, Ballance Agri-Nutrients, today reported a strong lift in profitability and a $20 increase in rebate to farmers to $45 per tonne, with a total distribution to shareholders this year of $54 million.

The gross trading result for the year ended 31 May 2017 was up $22 million to $56.8 million. An average Ballance shareholder will receive a distribution of $4,500 with payments from 28 July. The mid-winter boost in cash flow will average up to $8,000 for farmers using a high-value product mix, with individual payments of more than $100,000 to the largest farming interests.

Chairman, David Peacocke, says there were significant efficiency gains in the business and increased demand for premium high-analysis products, while total sales across fertiliser, feed and the industrials portfolio were largely flat on last financial year at 1.62 million tonnes. “Our Co-operative rebounded from a tough prior year, with a very good result and distribution to shareholders along with a healthy balance sheet and strong cash flows.”

Continued financial discipline, and the strength of the Co-operative’s balance sheet, is reflected in an equity ratio of 77.9%. Cash flow from operating activities was $83 million, compared with $35 million in the prior year. This allowed for the repayment of debt and resulted in a positive cash balance at year-end.

While revenue was 4% lower at $805 million, procurement savings in key fertiliser inputs, coupled with a record year of production at the Kapuni urea plant, enabled the Co-operative to deliver value to farmers across the year together with an improved profit and distribution.

The Kapuni manufacturing plant’s return to full production saw it achieve record production of more than 277,000 tonnes, compared with a historical average of 260,000 tonnes. Kapuni’s New Zealand manufactured urea supported the Co-operative to maintain a competitive offering in the first half of the year when international urea pricing was subdued, and to benefit from recovering demand and improved pricing in the second half of the financial year.

Chief Executive, Mark Wynne, says while fertiliser sales volumes were down about 1% and the average revenue per tonne fell during the financial year, there is a growing preference for Ballance’s ‘smart’ products that typically deliver higher margins.

“We have continued to see rapid growth in the appetite from New Zealand farmers for high quality targeted nutrient solutions, including locally-made nitrogen inputs – such as SustaiN and PhaSedN – which are more effective, efficient and have much better environmental performance.”

These two products now account for more than half of all Ballance’s nitrogen fertiliser sales.

“This is fundamental to our focus on long-term sustainable production from New Zealand soils,” Mr Wynne says. “Our new generation of sophisticated products respond to a rapidly-changing farming landscape and the need to farm within limits.”

He says investment in research and a pipeline of science-based products, coupled with new high-tech nutrient management tools and tailored advice, is paying dividends and meeting a growing need for farmers to future-proof their businesses.

“We’re seeing very strong demand particularly for PhaSedN, and the addition of South Island manufacturing capability has enabled growth of 60% in this product over the past year.”

The 2017 financial result includes a final impairment of $3.8 million for project feasibility costs associated with a Kapuni plant rebuild, following last year’s $13 million project cost write-down. Mr Peacocke says the Board and Management reviewed all potential current options – including a greenfield development – before confirming a staged reinvestment in the existing plant.

This will have reduced risks for the Co-operative and maintain domestic production capacity, while enabling the adoption of new technology to benefit New Zealand farmers and industrial customers.

Mr Wynne says: “A greenfield plant has a range of financial, environmental and operational advantages. These benefits have to be weighed up against the risks of extended volatility in global urea prices and the likely funding costs from international lenders with a reduced appetite for large-scale projects involving commodities.”

“The Board has not ruled out future redevelopment at some point, but in the current environment we have exhausted all options for Ballance to lead this project. We have determined that staged investment from our strong cash flows is the more prudent option than raising significant debt to fund a new development.”

Mr Wynne says the focus on surety of supply and efficiency gains has been unwavering – even with legal action in South Africa detaining a 55,000 tonne phosphate shipment bound for Ballance, relating to the long-running geopolitical dispute over control of Western Sahara. There is not expected to be any material financial impact to the Company relating to the vessel charter costs.

“While we have been navigating this complex issue, we have been scrutinising our procurement approach and this has delivered twice the expected savings, adding several million dollars of annualised gains to our bottom line.” Ballance continues to strengthen its New Zealand distribution network to further improve service to customers and ensure year-round supply of finished products.

During the year $35 million was invested in upgrades and expansion of key service centres and logistics hubs, along with completing a successful pilot of a self-service fertiliser silo in Canterbury. The Co-operative has also made significant investment in digital technology and is in the final stages of preparing for the roll-out of the MyBallance online portal. This will allow customers to manage their shareholding and place orders directly, online 24/7.

Mr Wynne says MyBallance is about the Co-op “using new digital technology to put farmers at the centre of the business and in control” through mobile platforms that are increasingly key to running smart farming operations.

Mr Wynne says Ballance’s ability to build a strong portfolio of products best-suited to local farming systems has delivered higher sales in animal nutrients with SealesWinslow. SealesWinslow achieved a significant lift in profitability in the financial year, on the back of an increase in sales volumes of nearly 50% – further strengthening its position as the number one branded calf feed.

“Improved prospects in dairy have certainly helped with both nutrients and feed, and our product innovation and commitment to quality has been fundamentally important in both areas.” 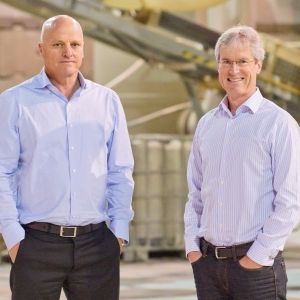