The winner of this year’s Ahuwhenua Trophy for the top Māori Dairy farm is Tataiwhetu Trust located in the Ruatoki Valley south of Whakatane.

The Minister of Agriculture, Hon Damien O’Connor announced their success at the Ahuwhenua Trophy awards dinner in New Plymouth attended by 800 people including the Hon Willie Jackson, Hon Meka Whaitiri, Kiingi Tuheitia, other dignitaries, politicians, agribusiness leaders and whānau from all the finalists.

As the Minister presented the winners with the trophy there were scenes of great jubilation as Trust members and whānau came on stage to join in the celebrations.

Tataiwhetu Trust is an organic dairy farm on which run 432 kiwi cross cows and carry 188 replacement stock on their two support blocks. They milk once a day and their herd produces 129,140 kgMS.

The other finalists were:

Pouarua Farms, a large operation consisting of 4,600 cows run on nine separate farms located near the township of Ngatea on the Hauraki Plains, close to Thames. The 2,200ha platform is the largest single dairy platform in the Hauraki region producing approximately 1.65M kgMS.

Tunapahore B2A Incorporation, a 385 cow operation located at Hawai and Torere on State Highway 35 on the East Coast of the North Island. The milking platform is 132ha, with 385 cows producing 125,940 kgMS.

Kingi Smiler, Chairman of the Ahuwhenua Trophy Management Committee, says the standard of all the finalists this year was particularly high and the judges had their work cut out to come up with a winner. He says the field days run by all the finalists were extremely good and showed the quality and depth of Māori dairy farming enterprises. Each finalist excelled and all are great role models for farmers.

“But in the end Tataiwhetu Trust were determined the winners and they and their staff are to be congratulated for this. Their farm is very special and is yet another example of our people working innovatively and hard and focusing on key strategic objectives. They join an illustrious alumni of past winners” says Kingi.

The Ahuwhenua Trophy is the most prestigious award for excellence in Māori farming and was inaugurated 88 years ago by the great Māori leader, Sir Apirana Ngata and the Governor General at the time, Lord Bledisloe. The objective was and still is to encourage Māori farmers to improve their land and their overall farming position with an emphasis on sustainability. On a three year rotational basis, the Trophy is competed for by Māori in the sheep and beef, horticulture, and dairy sectors. This year the competition is for dairy.

More details are at www.ahuwhenuatrophy.maori.nz. 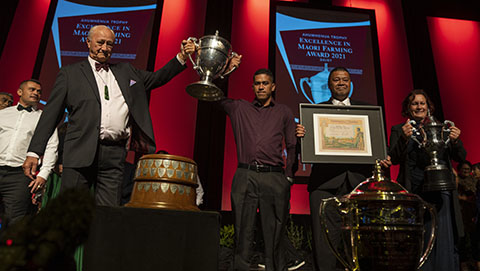