The finalists in the inaugural Ahuwhenua Young Māori Grower Award 2020 have been told that one of the big challenges facing Māori is increasing the number of young Māori into leadership roles in the horticultural sector.

The three finalists, 24 year-old Brandon Cross, Maatutaera Akonga, who is 26 and Finnisha Tuhiwai who is 25 were taking part in an intensive three day study tour designed to provide a range of insights, inspiration and experiences across the horticultural sector.

The Young Māori Farmer Award was inaugurated in 2012 and is designed to recognise up and coming young Māori in the farming and now horticulture sectors. This year the competition is for horticulture. It is built on the vision of the great leaders Sir Apirana Ngata and Lord Bledisloe who sought to inspire and encourage Māori to excel in the wider agri-sector.

He says the study tour organised by New Zealand Apples and Pears was used as a platform for observing the finalists and selecting a winner to be announced in November. He says it was designed to give the finalists an insight into the innovation taking place within horticulture, be inspired by Māori leaders and learn from key people who are involved across the horticulture value chain.

“We visited the Ngāti Pahauwera Development Trust Orchard in Napier for the finalists to be interviewed and filmed, delivered a leadership programme with special guest Kristy Roa, the 2019 Ahuwhenua Young Māori Farmer Sheep and Beef winner, and visited the Plant and Food Research facility in Hawke’s Bay.

We were hosted by the Turners and Growers innovation team and Berries Farm NZ, and participated in a presentation from Horticulture New Zealand. To add to a busy schedule we were privileged to spend time over dinner with Ngahiwi Tomoana, the Chair of Ngati Kahungunu, his wife Mere and Karl Wixon, a designer, educator, project manager, strategist and ‘kaupapaholic’. All the finalists were treated to stories of inspiration and wisdom they will never forget” he says.

Matiu Julian says the three day study tour offered the finalists a sense of connection and celebration of Māori success as the next generation of young Māori looking to evolve and live up to the Ahuwhenua Trophy legacy in horticulture.

He says the challenge before them is to think about the types of experiences that want to have, how they want to grow and how they can give back to their whānau and communities.

He says there are many examples of Māori excellence for the finalists to be inspired by and being Māori is to be gifted with talent and vision with an innate sense for the health and wellbeing of others. This is manaakitanga.

Matiu Julian says as a special recognition of being the inaugural finalists in the Ahuwhenua Young Māori Grower competition, Peter MacGregor, who has a long and distinguished career in the Māori agri-sector, presented each of the finalists with a miniature trophy.

The winner of the Ahuwhenua Young Māori Grower competition will be announced in Rotorua on Friday 20th November at the Ahuwhenua Trophy awards dinner showcasing the award for Māori excellence in horticulture and supported by Māori leaders in the primary sector. 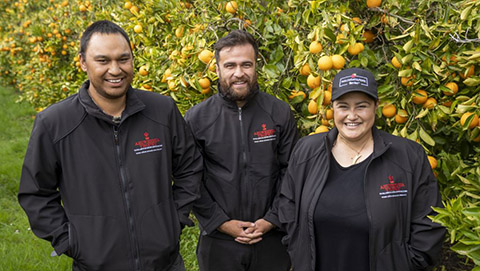